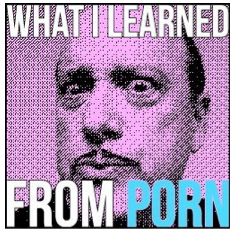 Originally hired to co-write with Cash Markman in 1994, when Markman began directing a year later, he asked Frank to appear in many of his story-driven adult features as a non-sex actor. As is the tradition in productions outside of the mainstream, a name needed to be invented. Inspired by Cash’s own nom-du-porn to clearly indicate the prime motivator for working in the genre, Frank devised his name on the French, USA and UK currencies: viz, Franc, Buck, & Quid. Then a little deviousness with the spelling and, voila! Frank Bukkwyd.